A. Karma Flitit has disappeared without a trace, holding up progress in The Case of the Worthless Newspapers.

Only hours before midnight on 31 December 2015 a mysterious book is left at 221b Baker Street.

Sherlock is afraid that it signifies that a secret society has gotten involved and sinister characters may be involved.

THE CASE OF THE
RADICALLY OPEN SECRET SOCIETY

One strange book for one scary New Year

A page from the book.

An even more last minute update.

A new case is born.

I fear the New Year

A strange gift for the new year

I had reservations for 21:30 at our favorite Chinese restaurant just north of Leicester Square. When I arrived at 221b Baker Street I was expecting Sherlock to be dressed and ready to go for dinner. Instead, he was still in his night clothes. Normally I wouldn’t mind, but tonight was New Year’s Eve and reservations were hard to come by anywhere near Piccadilly.

“Sherlock,” I shouted, “I am upset with you. We are due in at half-nine and we must leave now.”

I stood still and glowered at him.

“You win. Instead of doing what I ask, please do sit down first, and then shut up.”

There was no way I was going to follow his orders this night of all nights. “I will not,” I shouted. Then I sat down and said firmly, “See. I am not going to do what you say. Today you are going to do what I say.”

Sherlock looked at me and smiled. I sneered. He smiled a broader smile. I became furious and began pounding the arm of my chair with my fist.

Then it occurred to me that I had done exactly what he wanted me to do. “Sherlock, you are insufferable. Get ready, we have to go.”

“We’re not going anywhere; not tonight, we’re not.” He tossed me a big object of some kind. I wasn’t ready to catch it so it hit me in the stomach and knocked the wind out of me.

Sherlock said, “This book arrived no more than thirty minutes ago. It was delivered by a courier who left it at the door and rang the doorbell. I made the mistake of going downstairs to retrieve the package rather than look out the window first, as would be my normal practice. However, it has been so long that I’ve been away from the game that I’ve become rusty. Now look at this and tell me what you see.”

I looked at the object. “It’s a book. It is heavy. The binding cover is made of leather and the binding is deteriorating. And it is very old. Now, get dressed and let’s go.”

“Sorry. Not good enough. What else do you notice?”

“There are two metal clasps with locks that prevent you from opening the book.

“It has a ying yan symbol printed on the cover. Now, can we go?”

“Whatever. I don’t care if it is Mister Yin or Mister Yang; we are going to be late.”

“It hardly matters. You are not looking at the ancient Chinese symbols. I have never seen something like it before. I’ve done an internet search on the image and nothing comes up”

“Who cares. It is New Year’s Eve. We have dinner reservations. Can we go?”

“No. We must post something on the web. We told our Irregulars we would have A Shot Across the Bow ready for them, but we have nothing.”

“Sherlock, you told me that we wouldn’t work on that until you found A. Karma Flitit. Did you locate her?”

“No, damn it.” I seldom saw Holmes so frustrated. We were planning on beginning on A Shot Across the Bow on Boxing day when Sherlock showed a text message he’d gotten on his phone from her. It read:

hey sherlock: i am in a simlarly reflctive mode on that our point is in a sciety. i fhink it’s prety fundmental to democrcy but thnk it’s folish to thnk we know or care more than the peple who actually live in comunities or care abt isues. i’ve had enuf for now; gettnon a plane for vac and goin off the grid til early nxt year. cul akf

I asked Sherlock if that meant the project would be on hold and he said, “No way. There is no such thing as ‘off the grid.’ She’s got to make a phone call, check into a hotel, rent a card, use her GPS, use her credit card… If she does anything I’ll find her.”

Sherlock told me that I’d do best if I got out of town and let him work. He would call me as soon as he found Karma. So I booked a nice room in Brighton and relaxed. I talked to him every morning and evening but he was making no progress whatsoever.

Today was the first day I saw Sherlock in a week and, by the looks of him, I don’t think he had changed his clothes, taken a bath, or slept since I’d left him.

“Sherlock, give it a rest. We’re not going to make the deadline; it won’t be the first time. Clean yourself up, put on some clothes, and we’ll have a nice dinner at our favorite restaurant and ring in the New Year.”

He looked at me blankly for perhaps a minute, and then he said with resignation in his voice. “As so seldom happens, I think that this time you are right. I have to shower, shave, and get dressed. You write up what we’ve discussed since you came this evening. Take a photograph of the book and post it with these questions:

Questions for the Baker Street Irregulars

What is the mysterious book for?

What is the symbol on the cover?

What do the characters above the symbol mean?

Where in the world is A. Karma Flitit?

“We’ll just let our Irregulars work on the problem. If they can’t find Flitit before she gets back in touch, at least we can amuse ourselves with this book.”

He took a shower quickly but took an inordinate amount of time dressing. I think he was listening to me type because only when I was done did he enter our living room.

“Yes. All I have to do is attach the photograph.”

Sherlock took the book with us to the restaurant. It was infuriating. I was so angry I almost made a scene, as if I were a lover being ignored by my paramour. Sherlock ignored me completely.

When they brought the tea I asked if he would like me to pour some on him. Without thinking he said, “Yes, please.”

So I poured the tea on his head.

He threw his napkin over the book and shook his head as a dog might. Then he used napkin to dry his hair. Finally he said coolly, “Please do not do anything that might endanger the integrity of this specimen. I fear something sinister may be going on and this might be a crucial piece of evidence.”

Using some chopsticks and the hairpin from a lady at the adjacent table he was able to pick the two small locks on the metal clasps. Carefully, he opened the book.

Every page in the book was blank on both sides. Even so, Sherlock examined each page very carefully, feeling the texture, holding the page to his nose, looking at it from an angle, and holding it to the light.

This examination took about half an hour during which time the waiter asked for our order. Sherlock ignored him and so I ordered what we regularly get.

Finally he put the book down on the table, opened the cover, and carefully ripped out the first page.

“Is that wise?” I asked, “This looks like an ancient tome; you might be destroying a rare and valuable specimen.”

“Nonsense.” Sherlock held the page over the candle. Slowly the paper began to discolor, albeit not evenly.

He moved the paper over the flame to distribute the heat evenly. Once he was satisfied the process was complete, he put the paper on the table and said, “That’s important.” Take a photograph with your phone and update the post.

A page from the book. 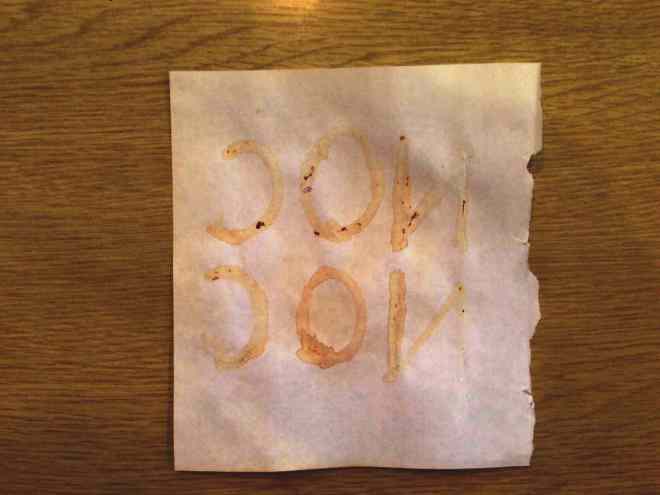 An even more last minute update

Sherlock and I ordered the same dishes we always do. When we were done the waiter delivered the bill. As he was about to hand the bill to Sherlock I snatched it because it was my turn to pay.

He said, “Don’t be ridiculous.”

I said, “I guess I’m confused. Perhaps it is your turn after all.”

He called  the waiter back, handed the check to him, and said, “We’ll have separate checks, please.”

I thought that was odd; we usually take turns. When the new pair of checks arrived things got even odder.

Sherlock said, “Look at your check. Do you think you can remember everything about it?”

“I mean everything; what you had, the color of the paper.” He paused, I looked up, and then he winked. “I want you to remember how many blue horizontal lines, red vertical lines, and whether the background is blue or white.” I realized he wasn’t wink but a tic. Something was wrong and Sherlock was scared.

He continued, “Imagine you lose this check and Professor Moriarty gets his hands on it. He holds a gun to your head and begins asking you about your bill. If you get anything wrong he will kill you.”

Sherlock was beginning to frighten me, “What are you trying to tell me?” I asked.

“Study that receipt as if your life depends on it. Take your time.” Sherlock went to the bathroom.

So I tried but I wasn’t sure what I was looking for. When Sherlock returned, he asked for my bill. I gave it to him and he gave me his.

“It’s taken care of,” Sherlock said, “I didn’t need you to pay half. I just needed two bills. Now you keep mine in your wallet and I’ll keep yours. Don’t forget what was on yours and don’t lose mine.”

I put his receipt in my wallet although it wasn’t clear to me why I was doing so.

“Now, get back on your phone and update the post with what just happened.”

I did it. When I was done and about ready to hit Enter, a thought occurred to me.

“Sherlock,” I said, “We promised the readers a book called A Shot Across the Bow. What does this have to do with that?”

A new case is born

“Good point.” Sherlock thought for a minute, “Perhaps they are unrelated. Start a new case. Let’s call it The Case of the Radically Open Secret Society.”

“That’s weird. What should I call this chapter?”

“Three letters, repeated twice with a space between them. He showed me how he wanted it on the paper.”

I fear the New Year

As I complete this I hear the roar of the crowds in Leicester Square. I am so close that I decide to hold off for a few more seconds.

Happy New Year
Irregulars, please help us, wherever you are.

If you want to help solve this mystery without bothering Len Bakerloo then you should read about how to become one of Sherlock’s BS Irregulars by reading this.

If you insist on bothering him, then you can use this form: